Included on the recent album After Hours by The Weeknd, Escape From LA deserves attention for his main groove and the hi-hat feel in double time.
Here’s the transcription of the main groove: a slow hip-hop beat with an interesting hi-hat part at the end of every four measures. This is a drumset adaption since the drums is played by a drum machine like most of the songs of the album… a different and creative perspective. 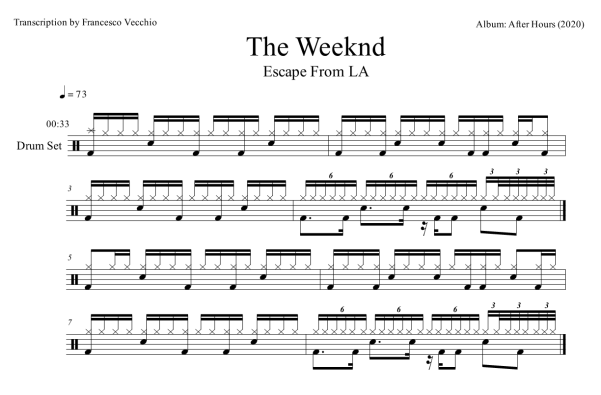 The bass drum and snare pattern is basically a two-bars loop. The hi-hat moves to a 16th sextuplets and in the last beat to an eight-note triplet subdivided in 32th note triplets. The two levels create a polyrhythmic groove, a six against four figure. Regarding polyrhythm, I suggest the excellent book Polyrhythms for the Drumset by Peter Magadini.