I want to thank John Di Raimo for contacting me, sharing his article regarding the single-hand hi-hat technique, played by Jeff Porcaro on several tunes, in particular, I Keep Forgettin’ by Michael McDonald. Here’s the original article published by Modern Drummer in January 2009. 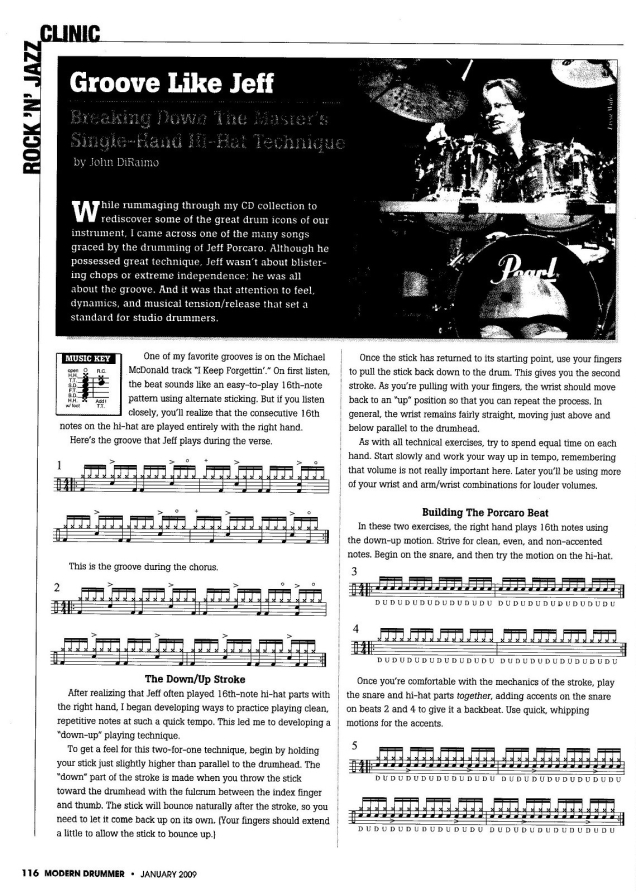 These exercises are so helpful to master the single-hand hi-hat technique especially at the 95 bpm of the song, the main aspect is to develop a “down-up” technique, in order to play clean and stay relaxed. Referring to the article:

«After realizing that Jeff often played 16th-note hi-hat parts with the right hand, I began developing ways to practice playing clean, repetitive notes at such a quick tempo. This led me to developing a down-up playing technique.
To get a feel for this two-for-one-technique, begin by holding your stick just slightly higher than parallel to the drumhead. The ‘down’ part of the stroke is made when you throw the stick toward the drumhead with the fulcrum between the index finger and thumb. The stick will bounce naturally after the stroke, so you need to let it come back up on its own (your fingers should extend a little to allow the stick to bounce up).
Once the stick has returned to its starting point, use your fingers to pull the stick back down to the drum, this gives you the second stroke. As you’re pulling with your fingers, the wrist should move back to an ‘up’ position so that you can repeat the process. In general, the wrist remains fairly straight, moving just above and below parallel to the drumhead.
As with all technical exercises, try to spend equal time on each hand. Start slowly and work your way up in tempo, remembering that volume is not really important here. Later you’ll be using more of your wrist and arm/wrist combinations for louder volumes».

In these two exercises, the right-hand plays 16th notes using the down-up motion, begin with the snare and then try on the hi-hat.

The next step, once you’re comfortable, its to play the snare and hi-hat parts together, adding accents on beats 2 & 4 using a whip motion. Now add the original bass drum pattern to complete the exercise.

Another suggestion is to use the book Progressive Steps to Syncopation by Ted Reed, reading the exercises from page 37 on the bass drum while playing the hi-hat and snare part as previously discussed. Remember start slowly and gradually, day-per-day, increase the bpm.

If you are interested the full drum transcription for I Keep Forgettin’ and the drum track of the song are available for purchase, keep on drumming.

John Di Raimo is a drummer and educator from Montreal, Canada. He has written articles for Modern Drummer magazine and The Percussive Society’s Journal – Percussive Notes. Received a diploma in Drumset and Percussion Performance at Humber College, Toronto and a B.F.A. and a Master’s Degree in Performance in Jazz Music at Concordia University in Montreal. He taught drum set for over ten years at the KoSA Centre for the Arts in Montreal.
During his career, he has performed with Randy Bachman (B.T.O., The Guess Who), Don Felder (The Eagles), Mickey Dolenz (The Monkees), Peter Noone (Herman’s Hermits), and Tito Jackson (Jackson 5).

Hi folks this is my drum blog, here you can find drum transcriptions, drum books, exercises and other stuff related to the music.

8 Jeff Porcaro full drum transcriptions, including some of his most memorable performances with artists such as Toto, Boz Scaggs, Steely Dan and Michael McDonald. 48 pages